Here comes the MRT system of the future. Not all the lines are in place, but at least you get a sense of the scope. 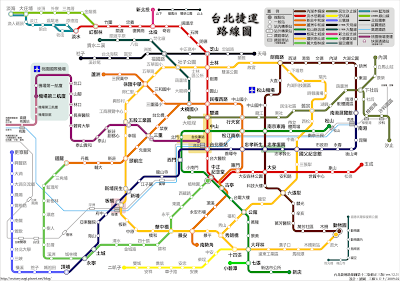 Learn about Taiwan's uniqueness from its youth

Tips for the Wet and Cold Months in North Taiwan 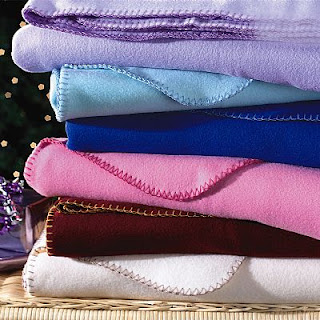 Word to the wise. If you've been trying to keep up the same Western habits for winter that you had in your home country, you've been doing it all wrong!

Winters in Taiwan's north are pretty depressing and uncomfortable. Often overcast with drizzle and rain and ranging in temperature from 10C to 15C, winters are, in some ways, much worse than in some of our more frozen homelands. This is mainly due to the fact that winters in Taiwan are so wet and humid but also because there is no way to get in from the cold, so to speak. Taiwanese houses don't usually have interior heating save for rudimentary electric heaters that don't really project a lot of heat. When you get out of the cool and wet, you're often in a house that is also cool(er) and wet.

So when it comes to staying warm, people from other countries living in Taiwan are often ill-prepared. So, to better prepare everyone, I give you my top two tips for making your winter much more pleasant.

1) USE A STACK OF HAND TOWELS, not full sized ones. Due to the humidity and the cool inside and outside, big towels will not fully dry from day to day, even if hung. In fact, because they stay wet, if you use any towel for days on end, they are likely to get moldy. Either buy one (several) of those quick dry camping towels or buy a stack of hand towels. They tend to dry faster. I suggest using one hand towel per shower and then throwing it in the laundry right away. As they are smaller, they'll take up less of your laundry anyhow.

2) FLEECE IS YOUR FRIEND! I mean anything fleece: jackets, shirts, hats and bedding. Yes, bedding! I'm sure the properties of fleece are probably well known to you in terms of keeping dry. There are also some new kinds of fleece that are wind and sometimes water repellant. Some stores sell fleece bedding which has a real advantage in the winter in that, when you crawl into bed, you won't feel that your bedding is wet. Crawling into a damp bed in the cold is a terrible feeling (my wife used to resort to using a hairdryer to thoroughly warm up her side before getting in). Wet bedding also eventually causes molding as well which I'm sure you won't like sleeping in either. You won't need to wash your bedding (and have difficulty drying it) as often with fleece.

If you're asking where I got these ideas from then the answer is simple: Taiwanese themselves. My in-laws keep stacks of hand towels as bath towels. I always wondered why they used small ones and threw them in the laundry right after using them. They also use tons of fleece for bedding and blankets. Now I know why on both counts. And I'm definitely a convert to these ideas!

If you have any other tips about getting laundry dry, buying heaters or anything else related to Taiwan winters, feel free to post a comment.

Posted by Unknown at 9:38 AM No comments:

The Third Reich goes down!

Great news! It looks like the large Nazi swastika symbol at the door of Macana is gone! It's not hard to believe, as it was so blatantly in poor taste. What is surprising is that it took so long! As I had mentioned before, someone had tried and failed to deface it, but it lived on for months.

Now, Macana has very cleverly changed the winged Third Reich logo into a lion with Zodiac signs. It now looks reminiscent of the winged lion logo that Van Halen used on tour years back. logo

Anyhow, I guess the pressure to change finally had an impact! Taiwan 1, Macana 0. 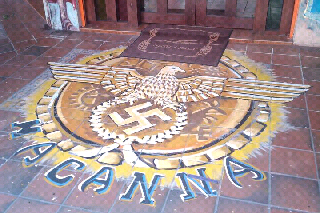 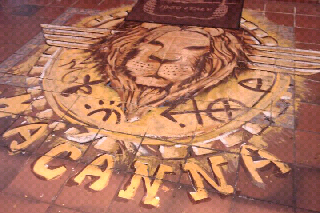 Posted by Unknown at 9:15 AM No comments: 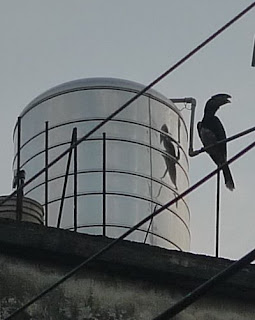 Now I've been told by a bird expert that this is an Oriental Pied Hornbill.

Trouble is, this variety of bird is not native to Taiwan, although it may be found in Southern China. So it makes me wonder how it got out in the wild here in Taiwan.

We were doing a long walk through a stretch of farm land near the river in Xindian when we heard a loud banging sound. Drawn in the direction of a water tower perched on the 5th floor of a building, we saw this astounding bird.

A local passed by and looked at us starring at the bird and asked, "What kind of bird is that?"

Anyhow, here is the video. You can hear the banging sound after the motorcycle passes.

The concept of having wild animals as pets is not uncommon in Taiwan. If you are interested, read more here about orangutans, wild boars and more:

If you are a bird enthusiast, we saw the bird at the location on the map. You can see the water tower in Street View: 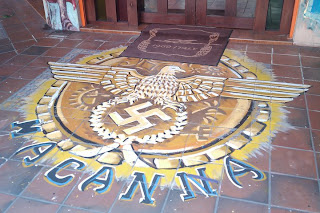 Spotted this on the sidewalk in the center part of Taipei. The store is Macana. It is undeniably Nazi.

Should you care to lodge a complaint or accidentally splash it with fresh paint follow the link to the location.
Google Map location
Posted by Unknown at 12:06 AM 1 comment:

I was finally able to get a decent recording of the myna bird in my neighborhood. Check it out!

This is the previous article:
http://blog.islaformosa.com/2007/09/myna-birds-taiwanese-sounds.html
Posted by Unknown at 11:50 AM 2 comments:

Yahoo Getting its Ass Kicked in Taiwan 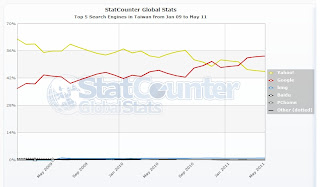 Taiwan used to be a Yahoo country. It appears the tide is changing and Taiwan is becoming Google-fied.

When Yahoo teamed up with Taiwan-based Kimo to offer Taiwan a localized version of Yahoo it seemed like a match made in heaven. Google has made up a lot of ground though, I'm guessing based on the adoption rate of Android and the myriad of services on Google now offered in Chinese.
Posted by Unknown at 1:36 PM No comments:

Pineapple Shrimp Balls. This Taiwanese dish is delicious but may make you you take a step back when you first see it. Deep fried shrimp on a base of pineapple, covered in sweet mayonnaise and cupcake sprinkles - that's right, SPRINKLES!

Haven't found what you want?

Looking for Something Particular?

Have you ever asked the Taiwanese why they behave the way they do? Think about all those strange customs, superstitions and commonly held beliefs that you can't quite wrap your head around.

If you do this frequently, you might often receive this answer:

It literally translates as "There is no why." But why would someone answer like this?

Well, Taiwanese sometimes don't question things the way we do. Kind of like saying, well that's just the way things are. No need to ask questions...

Well, this site's challenge and goal is to disprove this expression. There must be a why! Not only must there be whys but also whos, whats, whens, wheres and hows. The answers are out there lurking in the streets, homes, landscape and cyberspace that is Taiwan!